Shrinking cities, counter urbanization, sunbelt migration. These are related terms to describe the loss of population, primarily in the Northern states since the 1960s. Partly driven by economic opportunity, partly driven by retirees desiring a warmer climate, some places have experienced a steady decline in residents as others have seen their numbers soar. Based on the latest Census Bureau estimates, Business Insider shared a chart of the ten fastest-growing cities in the country. Eight out of ten are in Florida, with The Villages and Punta Gorda topping the list. While it is pleasant to ponder palm trees and tropical beaches, there are real consequences for the municipalities whose census numbers decline decade after decade.

As residents leave, they take their tax dollars with them. Property taxes, user and license fees decrease as those who pay them move away. If jobs leave the area, purchasing power evaporates and sales tax falls as well. While it is true that fewer people may need fewer services, major expenses like maintaining infrastructure meant for large populations persist. Lawmakers are faced with the difficult choice of raising taxes or reducing services.  However, no one is giving up. That same tenacity that sustains through subzero temperatures endures as urban grand dames explore strategies to redefine themselves in the 21st century.

Can shrinking cities become retirement cities?  This European idea explores the possibility of keeping retirees and even adding to their population by turning abandoned buildings and vacant lots into green space and community gardens close to senior populations.  We know that sustainability is important to mature generations, in fact, green retirement communities have been unable to keep pace with demand. A successful senior housing development in Newton, PA is putting these ideas into practice, combining green and age friendly living with established Quaker principles.  The lure of temperate climes may be powerful, but creating a sense of place where seniors can thrive and reinvent themselves along with their community can take the chill out of any harsh winter.

Shrinking smart refutes the idea that bigger is better. Youngstown, Ohio, for example accepted that their population may never return to peak levels and set out to diversify their economy that was left stagnant after the collapse of the steel industry. We mentioned previously that surrounding Mahoning Valley was a recipient of the EDA's Regional Innovation Strategies Program to support new technology start ups.  “Smaller, greener, and cleaner” are the buzz words from Youngstown 2010, the master plan developed to achieve their goals.  It is serving as a model for other cities who want to explore quality over quantity.  It also netted them the American Planning Association (APA) 2007 National Planning Excellence Award for Public Outreach.

While diversifying local economies is necessary for survival, diversifying funding sources is also important. Grants can play an major role in both supplementing lost revenue and helping cities pioneer new programs needed for their revival.  Securing awards is only half the battle. Managing it as efficiently possible to reduce waste and avoid penalties from audits is also crucial.  Detroit is an example of a city that is rebuilding the right way.  Rebounding from bankruptcy, they recognized that a sound and cutting-edge IT infrastructure was necessary for revival, including a new grant management system that allows them to maximize existing funding.

The above examples illustrate that a declining population does not have to mean permanent decline. Let us not forget that our most established cities were at the forefront of many social, economic and intellectual revolutions.  A shifting population is yet another opportunity for shrinking cities to evolve into post-industrial urban centers that thoughtfully and carefully re-create themselves on their own terms.

"A great city is not to be confused with a populous one." - Aristotle

Read "4 Key Takeaways from Detroit's Comeback" by clicking below: 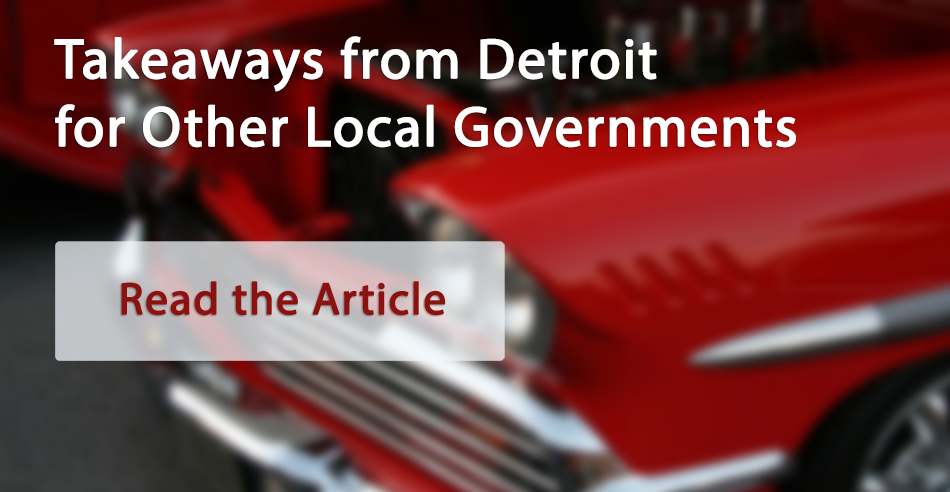