The State of Grant Funding in Arkansas: Part 1

This is the first installment of a three-part series on grant funding in Arkansas.  Part 1 focuses on charitable giving in Arkansas. Part 2 will discuss national foundations and federal programs of interest to Arkansas nonprofit organizations and state and local governments. Part 3 will outline the five things all entities must do to garner external grant funding for their programs and operations.

I moved to Arkansas for a job in the nonprofit sector some 20 years ago, when the tag line on automobile license plates was “Arkansas—the Natural State.” I quickly learned that Arkansas was also a “giving state.”

Although ranking in the lower quintile on most social and economic indicators, Arkansas abounds in charitable givers. For example, almost 15 percent of its families live below the poverty level; unemployment is currently at 7.3 percent; and for those who work, annual per capita income is below the national average at $33,150—46th in the nation. (2011 American Community Survey)

Yet, Arkansas ranks seventh in the Chronicle of Philanthropy's list of state-by-state charitable giving. In 2012, Arkansans donated 6.3 percent of discretionary income to charity. The estimated median charitable contribution of $3,554 puts them in the top five nationally.

However, philanthropy in Arkansas does not stop at the household level.

In 2009, the Arkansas Secretary of State reported 14,368 nonprofit 501(c)(3) organizations, of which 616 were registered as private foundations. According to the Foundation Center, which only tracks grant making and operating foundations, 301 grant making foundations are currently active in Arkansas—with total assets of $4.3 billion and total annual charitable giving of about $732 million (2011).

Five foundations head any list of top givers in Arkansas, and in some cases nationally and internationally:

In 2011, The Wal-Mart Foundation  (http://foundation.walmart.com/) reported $166.5 million in total giving around the world, with $9.1 million in grants to Arkansas.  The foundation supports projects and programs that focus on hunger relief and healthy eating, sustainability, women’s economic empowerment, career opportunity, and job training.

The Murphy Oil Corporation’s Eldorado Promise and The Murphy Foundation also primarily fund programs in Arkansas, and both have had huge impacts in the state. In 2007, Murphy Oil Corp., based at El Dorado, Arkansas, pledged $50 million over 20 years to pay college tuition for the city's high school graduates, or those who have been in El Dorado schools since ninth grade. In the program’s first year, half of the graduates were their families’ first generation college students. The Murphy Foundation, also based in El Dorado, has assets of about $53 million, and made $2.7 million in grants in 2011, focusing on medical and other aid to poor people (especially children), scientific research, and education, including individual scholarships.

Headquartered in Little Rock, The Winthrop Rockefeller Foundation (http://www.wrfoundation.org/index.html) was created in 1974 from the estate of the late Governor Winthrop Rockefeller. It is Arkansas’s fifth largest nonprofit organization and over its 35-year history has made grants totaling $130 million. With $128.1 million in assets, it supports programs that promote education, economic development, and economic, racial and social justice.

Lists of Arkansas’ Top 50 Foundations by giving and by assets can be found here.

How does your state rank in terms of charitable giving? Check out this map to find out. And a reminder: my next installment will look at national foundations and federal programs of interest to state and local governments and nonprofit organizations in “the giving state.”

Dr. Judith Killen has more than 20 years of experience in developing winning grant and contract proposals. She has served as lead writer or proposal manager for more than 300 proposals submitted to private and corporate foundations, international development banks, European government agencies and nearly every U.S. federal funding agency—including the National Institutes of Health, National Science Foundation, Department of Defense, Department of Energy, the Environmental Protection Agency and the U.S. Agency for International Development. The dollar value of these proposals has ranged from a few thousand dollars to more than $175 million. A member of the eCivis grant profressionals team, Dr. Killen can be reached at j.killen.j@gmail.com. 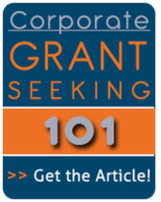